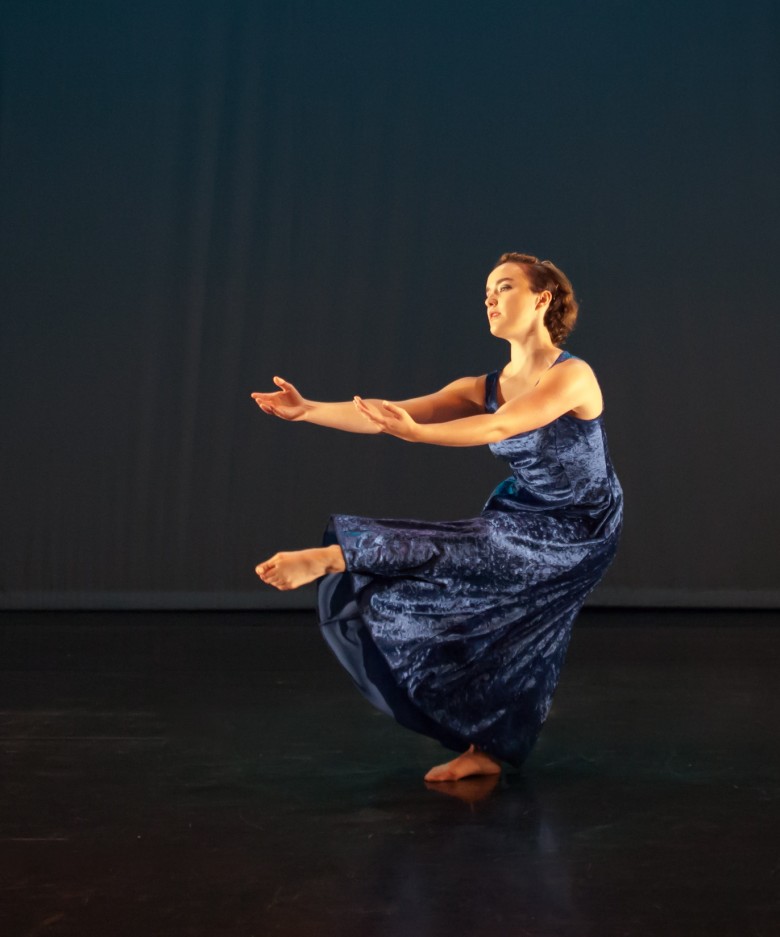 Unfold
Seasons: 2014, 2015
Music: Selections from 24 Preludes, Op. 11 by Alexander Scriabin performed by Mikhail Pletnev
Costume: Leica Hardy
Created in 2000, her work Unfold was originally created as a self-portrait of Baker’s life and career to date. Ms. Baker has created a unique group staging of Unfold that elicits a personal connection to the choreography from each of the cast members. 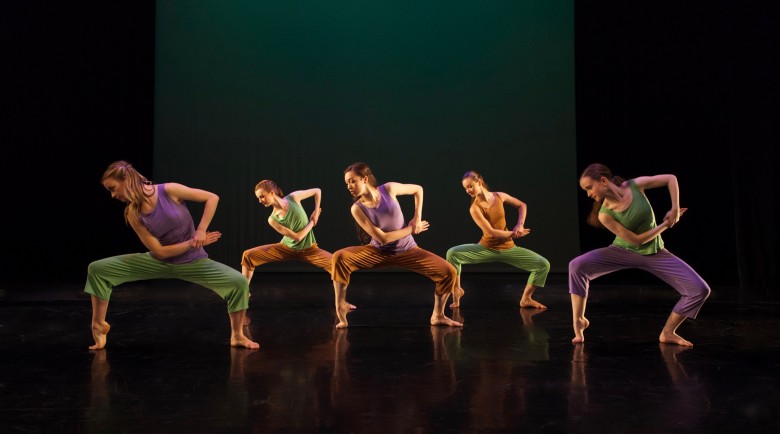 By Camille A. Brown

Been There, Done That
Season: 2013
Rehearsal Director for Ms. Brown: Francine E. Ott
Music: My Sweet Thing by N. Wilson, T. Edwards, G. Wilson
Been There, Done That is an excerpt from a larger work of the same name that was originally co-commissioned by the Jacob’s Pillow Dance Festival. This work tells the struggles of a dancing duo from the 1950/60′s.

Rebecca Wolfe in Been There, Done That
by Camille A. Brown

Circlesong
Season: 2016
Music: Circlesong One by Bobby McFerrin
Costume: Leica Hardy
Circlesong celebrates feminine power, which is expressed through movements restricted to circular pathways and shapes. A human henge defines the perimeter of the space creating an abode for the soul. 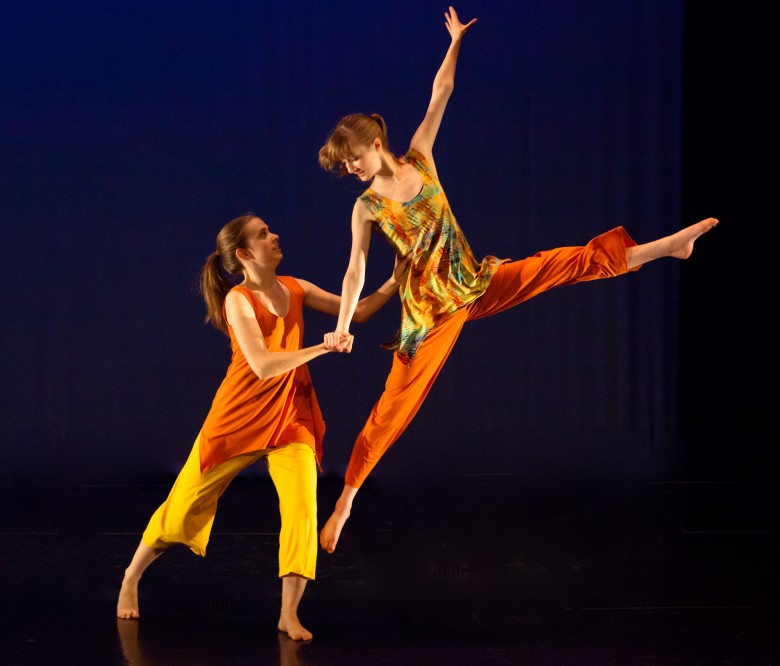 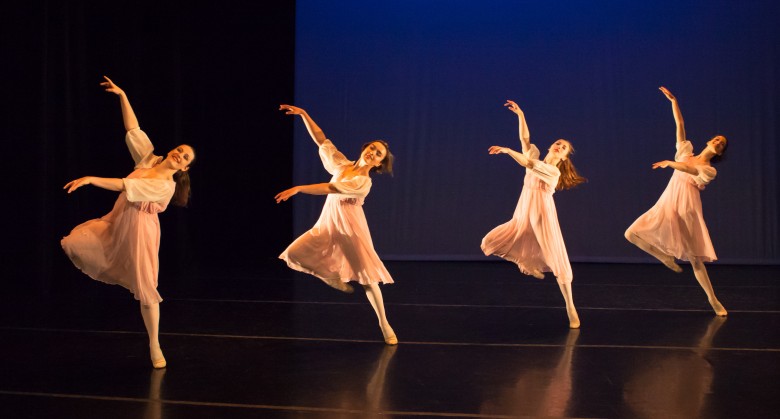 Interlaced
Season: 2015, 2016
Music: The Northern Three, Forked Deer, Brigitte, As We Pray, Hewlett’s & Box Man by The Fretless
Costume: Leica Hardy
Interlaced is a modern dance cèilidh to the joyful music of Canadian band, The Fretless. Patterns and movement themes from square and Scottish social dance, and Celtic knot-work give the work a feeling of community and sharing. 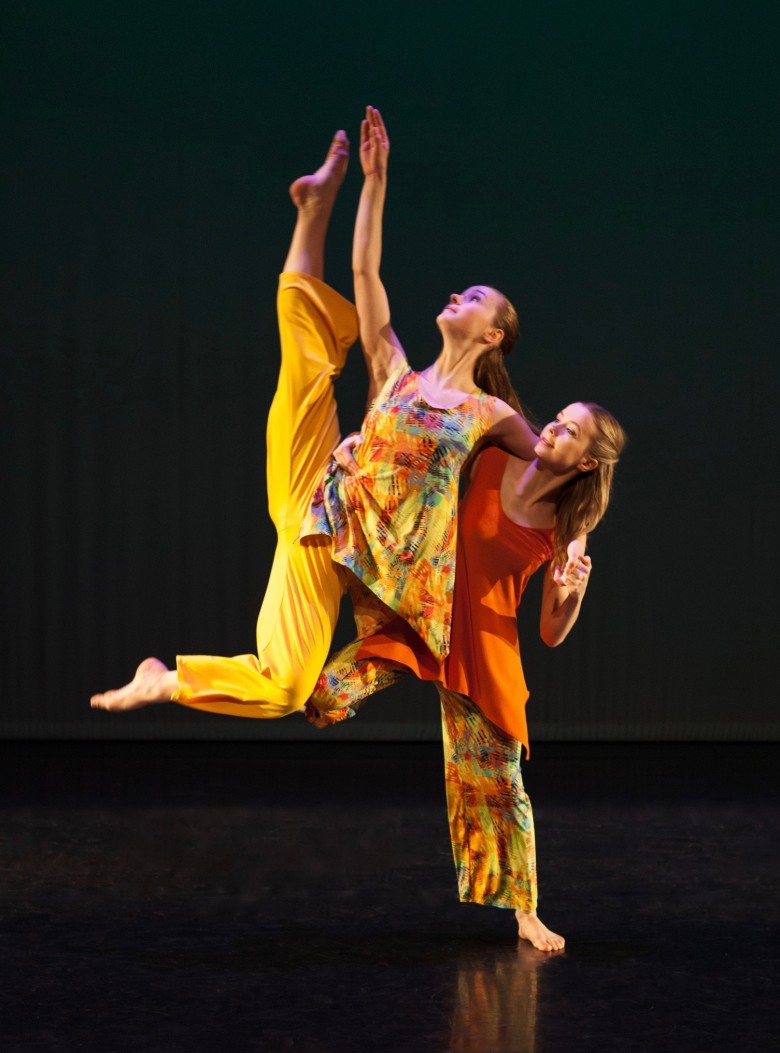 L to R: Lucie Schmidt & Hayley Bone in
Group of 5 from Interlaced by Leica Hardy

Legacy
Season: 2014
Music: Arrival of the Queen of Sheba by Handel
Costume: Leica Hardy
Legacy is an ode to the freedom and beauty of classic modern dance.

Murmuration
Seasons: 2013, 2014
Music: Hello Night, The Last Bird, We Insist, Flying & Flocking by Zoe Keating
Costume: Leica Hardy
A murmuration is defined as a flock of starlings. Themes of flight and bird-like movements; murmurs of the heart and voice add a deeper layer of meaning to the work. 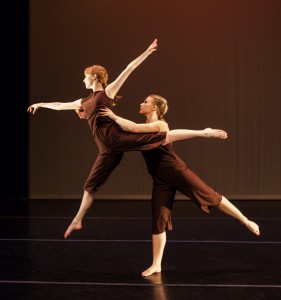 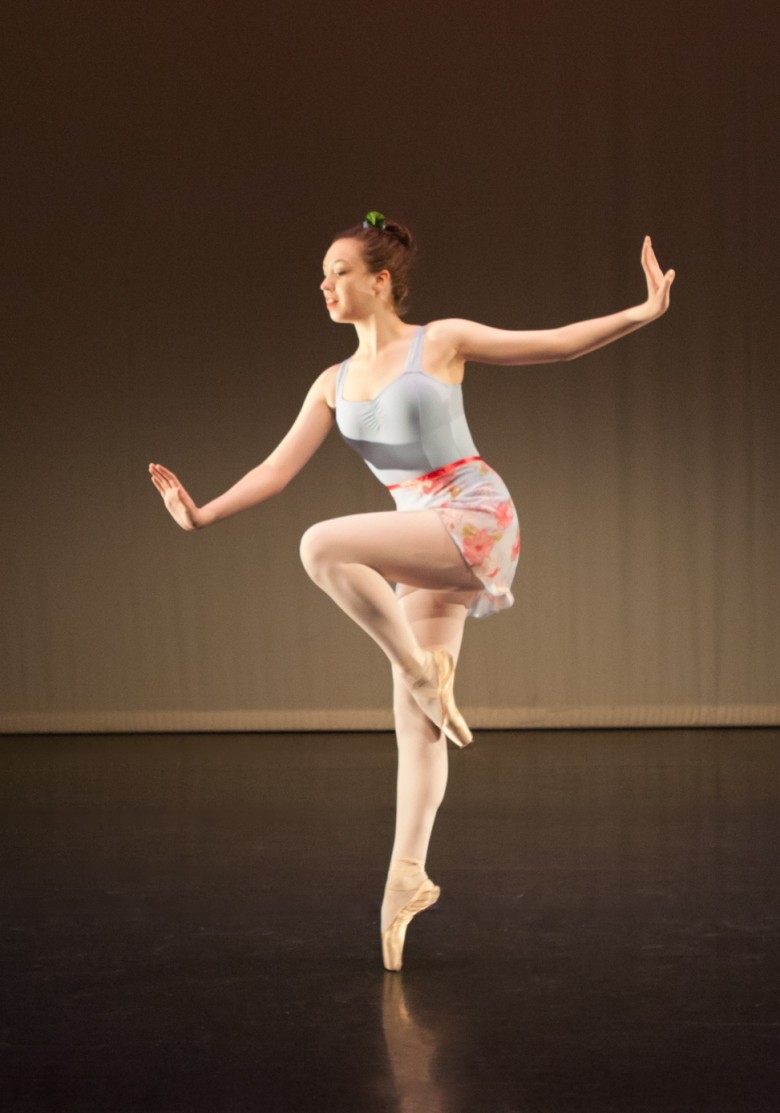 String of Pearls
Season: 2012
Music: Pearl by Jean-François Côté
String of Pearls is a tender work that portrays the emotional connectivity of a group of friends. The characters are formed and transformed by their changing relationships and emotions. 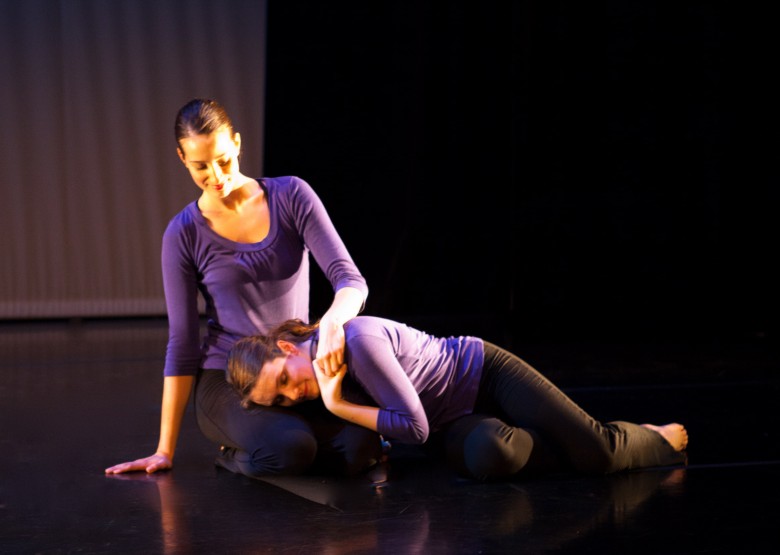 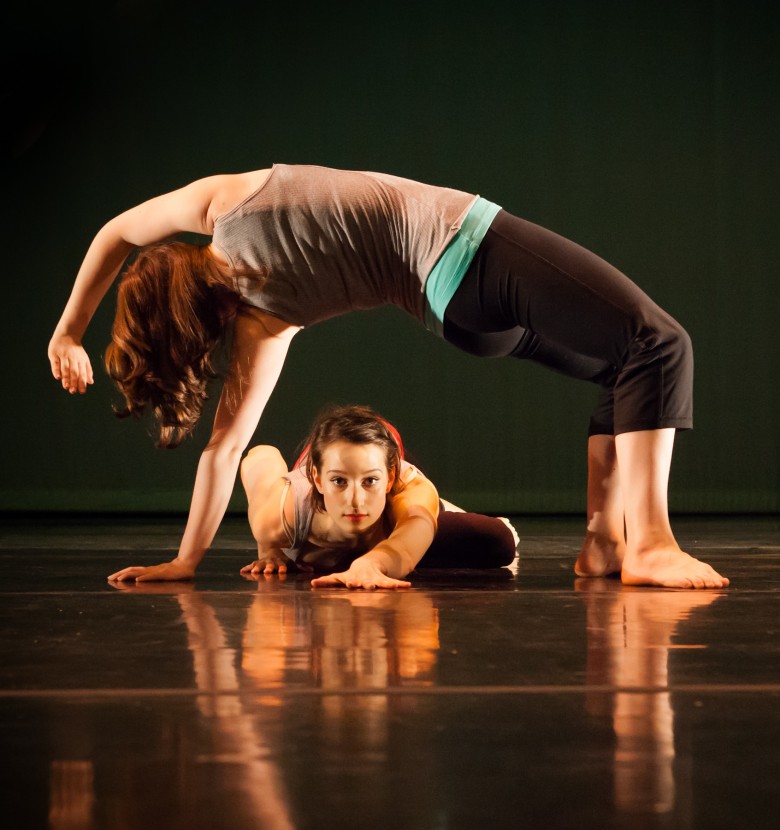 Top to Bottom: Rebecca Wolfe & Hilary Knee in
Tell It Like It Is by Leica Hardy

Waterways
Season: 2017, 2018
Music: Selections by Ludovico Einaudi
The movements of water, fish and sea life become an abstract allegory for the emotional journeys of the company’s 12 dancers.The work is a balance of strictly choreographed work, thematic movements developed from guided improvisations and purely improvisational performances.

We Three
Season: 2014
Music: We Three, My Echo, My Shadow & Me by Robertson, Cogane & Mysels
We Three is the laughable story of a trio of gum chewing cleaning ladies en-pointe.

One Needs A Little Courage To Live
Season: 2015, 2016
Music: Apocalyptic by Alaska, Violin Duet by Black Ox Orkestrar, Kook Aid River by Secret Mommy, Für Alina: 2 by Alexander Malter, Shiny Plastic Bags by Mark Berubé & the Patriotic Few
If you never step out of your comfort zone and take a risk, that zone will slowly being to shrink. It takes courage to take that first step again and again. 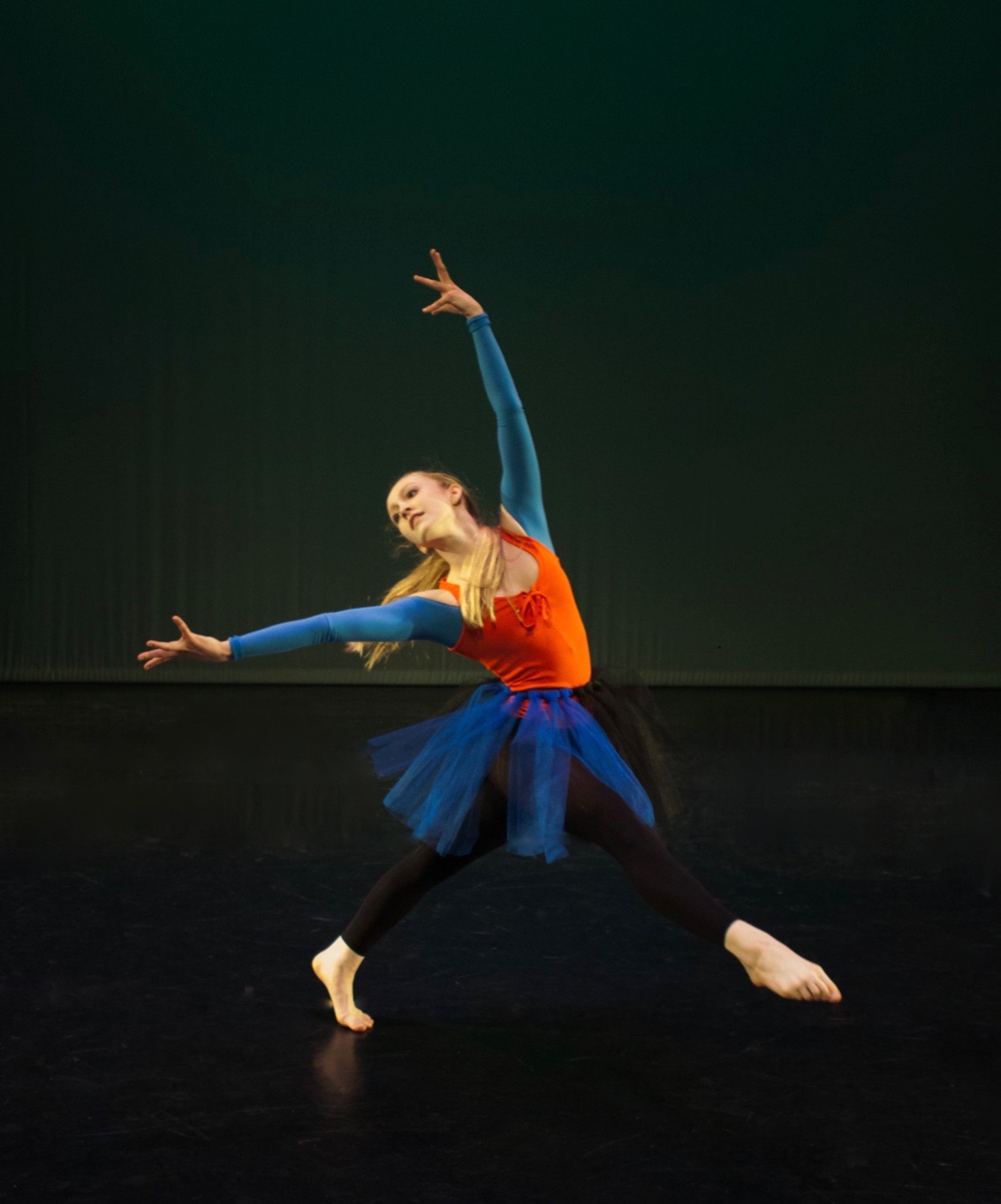 To Pulsate
Seasons: 2017, 2018
Music: A Soft Throbbing of Time by Frank Bretschneider 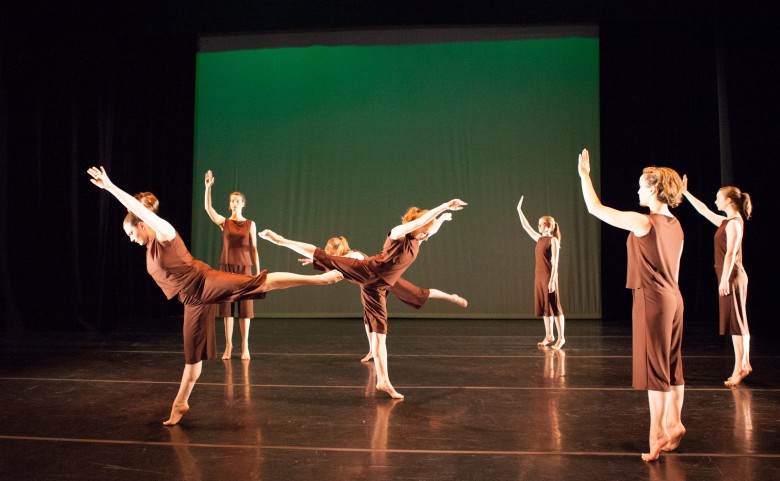 The company in Joy of F# Minor by Rebecca Lazier

You Say Goodbye & I Say Hello
Season: 2012
Music: Hello, Goodbye by Paul McCartney
Costume: Michelle Lehman, Emma Van Zeumeren
“A true friend thinks you are a good egg, even if you are half-cracked.”
Hello, Goodbye was the winner of the 2011 Taking Steps To Fly Choreographic Competition for the 14-17 year old category, sponsored by Kinetic Studio & Dance Nova Scotia.

Ewigkeit
Season: 2012
Costume: Leica Hardy
In German, the word Ewigkeit has multiple meanings: eternity, immortality, forever, eternality.The piece was created and developed with the dancers through improvisational explorations on the subject of “beauty”. 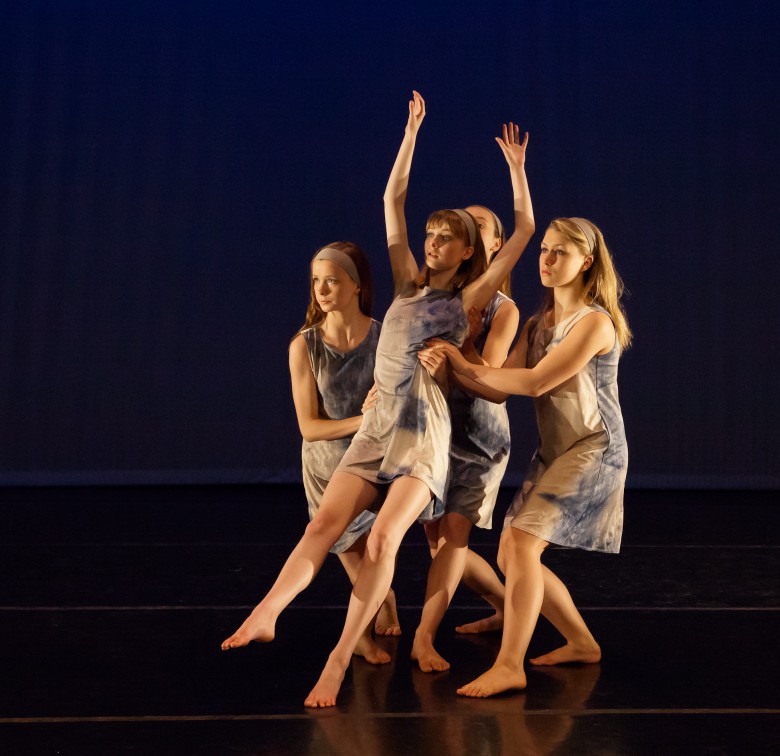 PLAYGROUND
Season: 2017
Music: Partita No. 4 in D Major: Sarabande by Bach, Ingenue by Thom Yorke
The playground is an environment that individuals enter to meet, interact, play and are encouraged to explore their behaviour inside of a choreographic structure. Come play with us!

The Gossips
Season: 2012
Music: Raunchy Rita by Richard Davis
Costume: Leica Hardy
A theatrical mix of dance and improvisational dialogue that looks at teenagers and their penchant to “talk”.

Chiralities
Seasons: 2013, 2016
Music: Shift Register by Robert Henke
The title means chirality or an object that is not completely symmetrical and the same as another. It is often used when describing protons and molecules, but used also to describe handedness and the fact that a human’s left hand is never the same as the right in harmony. This is poetic when thinking of humans – we are all a bit different and unique. 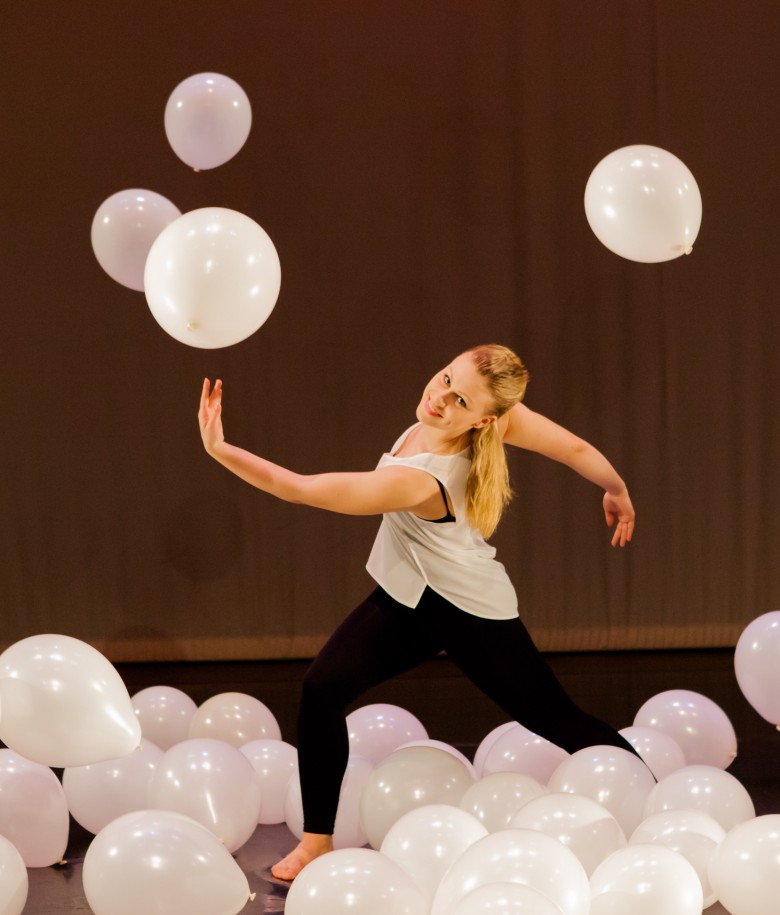 A Tale of Obscure Sorrows
Season: 2018
Music Samplings: The Question by Bovine Life + Comet, 0165(Tool) by Endless, Perc & Giorgio Gigli and some surprises from the 80’s
Music Editing: Darryl C. Tracy
A Tale of Obscure Sorrows was initially inspired by John Koenig’s Dictionary of Obscure Sorrows. “Koenig has made up new English words that attach to emotions we feel in current times — words such as avenoir, anecdoche and anemoia. Avenoir being the desire that memory could flow backwards, anecdoche being when everyone is talking, and nobody is listening, and anemoia being a time you’ve never known. The dancers wrote interpretations of the words, and we built movement from that creating an abstract landscape. We created by using chance. This is not a narrative piece but a state of obscurity.”  — Darryl Tracy

Season: 2019
Music: Symphonies of the Planets (Voyager Recordings) by Jeffery Thompson, Can Be by Tanner Torun, By the Deep Sea by Federico Albanese, Mauer Blues by Federico Albanese, Form By Firelight by Jon Hopkins, Abandon Window by Jon Hopkins, The Things We Do by Alaskan Tapes
Text: Rebecca Wolfe
Down the Line was a co-production with Nostos Collectives Dance.
Through grief and anxiety we have the ability to get lost in our thoughts and forget that we are connected to a larger community. Down the Line studies that even though we may lose sight of our connections to these communities, they always exit, pulling us back to reality and a safe state of mind. There is a strong female energy in the work, focusing on the bonds that hold us together and teach us that there are some lessons we learn our time and some lessons that we will never be prepared for.  — Anastasia Wiebe 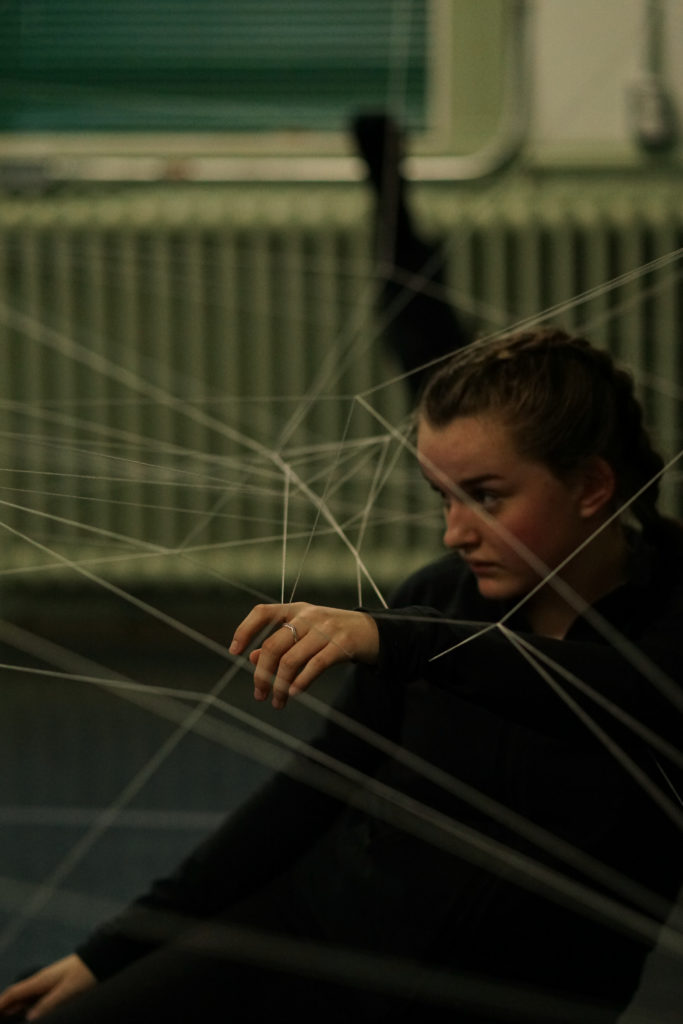 Grace Skinner in Down the Line by Anastasia Wiebe

Photo of Down the Line by Yukiko Asada.
All other photos this page by Cathy McKelvey.